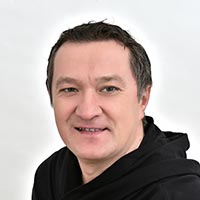 Since 1993, Vadym has worked with the theater “Gaudeamus” (Lviv city) in the performance of the honored artist Boris Ozerov. It was here that Vadym produced number of productions as a ballet stage director: “The Seagull” by Chekhov, “Mine name is Manya” by Kanevskyi, “Romeo and Juliet” by Shakespeare, “Pink triangle”, “Two on swings” by Gibson,”Portrait of Dorian Gray” by Wilde.

In 2000 he opened the first male modern-style ballet “Boys from Heaven” and had a successful tour in Ukraine, France, Italy, Germany, Russia, USA, and produced numerous choreographic performances: “Fire Plastic”. “Dejavu”, and also TV Musicals such as: “Chasing  two hares” and “12 chairs” (directed by M. Papernik).

In 2004, together with Vasyl Vovkun director of Lviv Opera, he staged “Military Requiem” by Benjamin Britten, which was widely promoted in the press and got many positive comments of leading theater critics in Ukraine and Russia.

In recent years, he has performed numerous state concert programs at the “Ukraine” National Palace of Arts, numerous shows on Independence Square (including the grand opening of “Eurovision” in 2005), but the talented choreographer increasingly saw his artistic purpose of serving in  the theater.

During his work in the theater he revealed himself as a talented artist of high qualification, who uses a wide variety of dance styles in productions – classical, folk, contemporary, step, etc. Vadym Prokopenko is one of the choreographers of  “Ball in Savoy” operetta by Abraham, for choreography of this operetta in March 2011 together with other choreographers N. Skuba and M. Bulgakov he  received the theatrical award “Bronek”. Among his latest works it’s worth to notice amazing and extraordinary choreographic performances in the musical “Welcome to Ukraine or Love Journey”, the concert “Ukraine in Songs and Romances”, the international project – a joint gala concert with leading soloists, choirs, ballet and orchestras of the Kaunas State Musical Theater and  Kyiv National Academic Operetta Theatre in 2011 in Kyiv.

On December 17, 2011 the premiere of “Chasing Two Hares”  operetta by Ilyin and Lukashov based on the comedy by Starytskyi took place. Vadym was a choreographer.

In June 2012, Kyiv saw a new interesting work by a talented choreographer – an interpretation of “Gypsy Baron” by Johann Strauss most famous operetta. A variety of dance numbers, including elements of acrobatics, as well as a drum parade and a live horse on stage. Gypsy authenticity became a special trend of the performance: gypsy folk music and a stylized marriage ritual of water purification, where a real gypsy 100-year-old handkerchief from the Austro-Hungarian Empire was used. The perfect concept, the bold transformations that the choreographer offers to the artists, surprise the audience not for the first time. Plastic compositions reproduce the authenticity, the primacy of folk rituals. Gypsy wedding rituals are a source of beauty, creative ideas and beautiful performance. Dancing under streams of living water, which symbolizes the purification of the soul, gives a feeling of harmony.

The premieres of recent seasons have been significant events in the theatrical life of Kyiv. Both spectators and theater critics realized that Kyiv Operetta Theatre offers new forms of musical theater. Theater critics noted the complexity of directing tasks, the growth of the professional level of artists, and most important – the coherence, clarity of productions created by orchestral music, choral and vocal singing, choreography and drama. In general, the operetta theater has conquered  the favor due to ability to surprise the audience.

The premiere of the musical “Kiss me Kate!” by Poter took place on June 14, 15 and 20 at the National Operetta of Ukraine.  Vadym Prokopenko was stage choreogrepher.

Among Vadym’s latest works as  choreographer and stage-director we can notice the following:  “Mademoiselle Nitush” operetta by Herve,  “Truffaldino from Bergamo” musical by Kolker. Vadym Prokopenko is also a choreographer and stage director of a series of concerts of the National Operetta of Ukraine: “Strauss in Operetta”, “To You, My Love”, “Evening of Musical”, “Ukraine in Songs and Romances”, International Theater Projects with the team from Romania, Lithuania and Hungary.