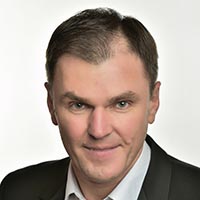 Igor Yaroshenko graduated from the National Music Academy of Ukraine named after P. Chaikovskyi in 2004 with a degree in “Musical Art” as a choir conductor.

Talented, professional choirmaster and persistent master who does not stop on what has been achieved, Igor Yaroshenko is constantly improving his professional level and performing skills, he is always in creative search. During staging the play “My Fair Lady” by F. Lowe he took an active part in the creation of the play, and in “Mr. X” operetta by I. Kalman as a choirmaster-director he  showed his professionalism in full capacity.

In December 2008, on the occasion of the 100th anniversary of the First Stationary Ukrainian Theater Igor was awarded by the Diploma of the Main Department of Culture and Arts for significant contribution to the development of theatrical affairs, conscientious work, high professional achievements.

In 2010 choirmaster-producer of the play “Sorochyn Fair”, Igor Yaroshenko as a member of the production group of  “Sorochyn Fair” by O. Ryabov after M. Gogol was awarded by the prize “Kyiv Pectoral” in the nomination “For the best musical performance”.

Constantly improving and expanding the scope of his creative capabilities since 2009, Igor Yaroshenko began working as a conductor. His first performance as a conductor – director was a romantic musical “Welcome to Ukraine or Journey to Love” (2011) by the music of Ukrainian composers.

In 2011, Igor Yaroshenko was appointed as acting chief choirmaster. Both the audience and critics appreciated his brilliant work as a choirmaster-producer in “Chasing for two hares” by V. Ilyin and V. Lukashov (premiere – December 17, 2011) and “Gypsy Baron” by J. Strauss, where Igor Yaroshenko performed not only as a director, but also as the author of the choir arrangements of the folk gypsy song “Malyarka”, where Yaroshenko poetically depicted the noise of a loud gypsy camp with a song.

As a conductor-producer Igor Yaroshenko staged the children’s musical “Treasure Island” by V. Bystryakov (libretto by D. Cherkasky and A. Harzman based on the work of “Treasure Island” by R. Stevenson), which premiered on December 14, 2012. On June 14, 2013 the audience for the first time saw the premiere of the original Broadway musical “Kiss me, Kate!” where Igor Yaroshenko performed as a choirmaster-producer of bright and extremely complex choral scenes. He also worked as a choirmaster on the musical “Truffaldino with Bergamo” by O. Kolker and as the conductor and choirmaster of “Mademoiselle Nitush” operetta by F. Herve.