The first step into the great art project. 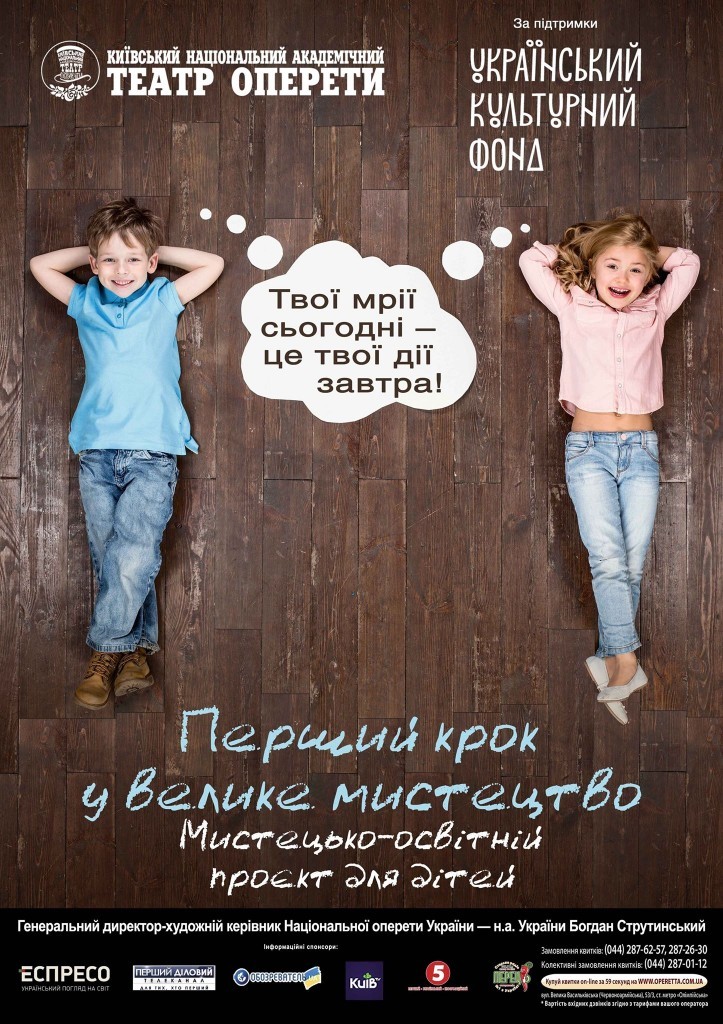 The team of the National Operetta of Ukraine at the support of the Ukrainian Cultural Fund, is launching a new project for children “The First Step into the Great Art”.
So, we hasten to share this good news with you! We have planned to create not one, but the whole seria of performances that will introduce the world of music to the children and give the opportunity to gain creative knowledge through the emotional component, in the form of an interactive performance.
We present musical instruments, both traditional and completely original, the work of well-known and not very well-known (but still original) composers, and many different facts and legends from the world of music to children.
We plan to create four performances with unique adventures and we have serious intentions to tell children stories about the development of jazz art and the creation of the saxophone. We will reveal the secrets of how the Ukrainian lullaby influenced the creation of the jazz hit, and who of the world-famous jazzmen was born in Bila Tserkva, Ukraine.
Let’s go with children on a creative journey to Africa with its rituals, magic, inflammatory rhythms of drums and fantastic tribes. We will hear the story and immerse ourselves in the atmosphere of ancient Ukrainian instruments, such as wheel lyre, bandura, cuckoo…We will try to answer all children’s questions. We will explore the colorful and unexpected intertwining of traditions, music and life in different countries. And, for example, we will learn why bullfighting influenced one of the most famous dances, which have become a brand identity of Spain.
The main goal of the project “The first step to the great art” is to develop educational and artistic direction, creating performances and programs about art and complementing the new project already existing in the theater cognitive and entertaining event for children “Weekend with an operetta”.
All this, we plan to present during the new theatrical season, in September / October. For the safety of our young viewers, the premiere of the performances of the project “The first step into the great art” is scheduled online, and most importantly – for free!
We sincerely believe that children will get a vivid emotional impression and “The first step into the great art” will become a great way to love music, theater and creativity, because children’s dreams today are children’s actions tomorrow!