The creative descent returned from a tour in Budapest 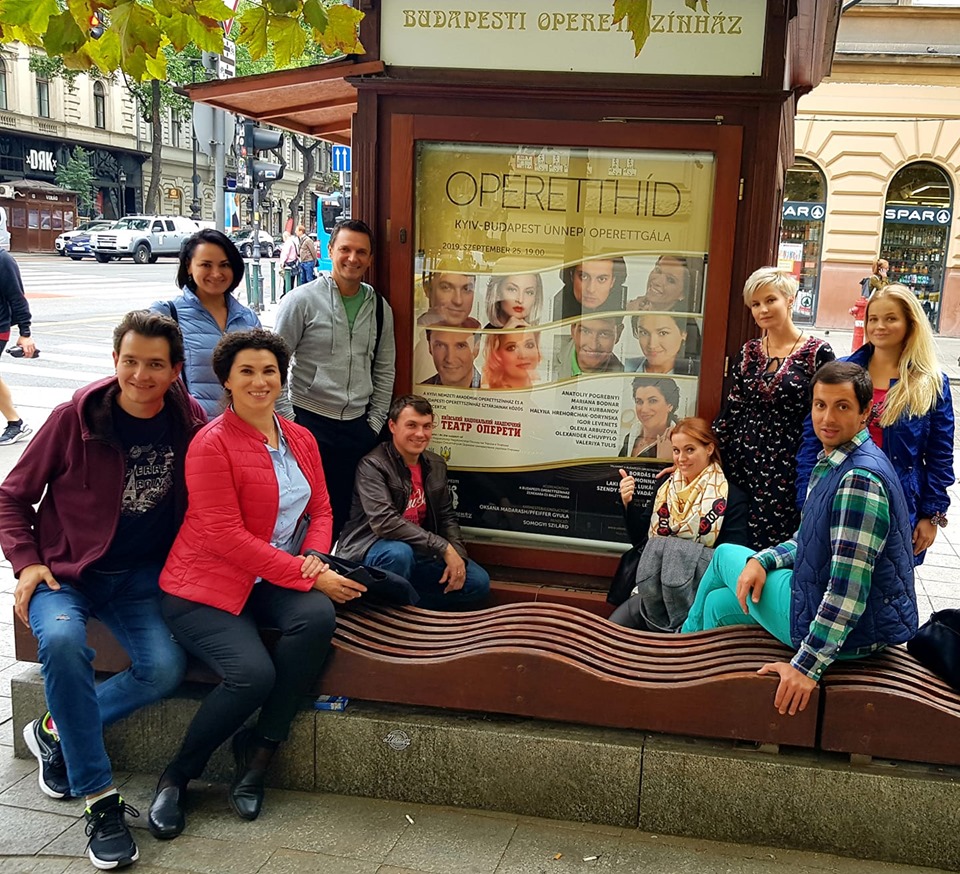 The program was very intensive and interesting. Gala Concert with the participation of Ukrainian and Hungarian operetta singers on September 25 was the apogee of the visit. Preparing for the concert, soloists with the conductor, the Budapest orchestra and ballet had three rehearsals a day.

A press conference was held before the Gala Concert attended by Bogdan Strutynskyi General Director-Art Director  of the National Operetta of Ukraine, Attila Kiss-B General Director of  Budapest Operetta Theater and the organizers of the visit – Lubov Nepop the Extraordinary and Plenipotentiary Ambassador of Ukraine in Hungary and Viktoriya Stefutsa the Head of State Self-Government of Ukrainians in Hungary.

The concert itself took place at the premises of the Budapest Operetta Theater. Soloists of the National Operetta of Ukraine presented compositions from such operettas as “Countess Maritza” and “Mr. X” by Imre Kalman, “Gypsy Baron” by Johann Strauss,  “Fraskita” by Ferenc Legar, ” Country of smiles” from the musical “Kandid” by  Leonard Bernstein, “Magic Flute” by Wolfgang Mozart. Ukrainian folk songs were also performed: “Oh, I’ll go to the mountains”, “Black eyebrows, brown eyes”. Arsen Kurbanov, who sang Aria of Boni from Silva operetta by Imre Kalman in Hungarian  got enthusiastic applauses. The auditory welcomed the international duets with enthusiastic applauses as well.

The Hungarian audience among whom there were many representatives with Ukrainian roots welcomed the soloists of the Operetta Theatre and the concert had a huge success.

By the way, Yvonne Kalman Imre Kalman’s daughter was invited to the Gala Concert to Budapest. She specifically arrived to the west from Mexico where she currently resides. For several years, Yvonne Kalman has been acquainted with the soloists of the Hungarian and Ukrainian operetta theatres and was pleased to meet them again. The daughter of the famous composer along with Ukrainians visited the monument to Imre Kalman and expressed her belief that her father would stay alive as long as his music is performed.

“It was a great trip. It was realized due to  the incredible support of the Ministry of Foreign Affairs of Ukraine, the Embassy of Ukraine in Hungary, in particular Ms. Ambassador Lyubov Nepop, the State Self-Government of Ukrainians in Hungary, and our incredible friendship and cooperation between two fantastic theaters – the National Operetta of Ukraine and National Operetta of Hungary! We are very grateful for the warm welcome. I also appreciate Andras Szentpeteri for all his help and amazing Yvonne Kalman, daughter of Imre Kalman, who specially arrived at the concert from Mexico. Thank you to our incredibly talented actors and conductor Oksana Madarash who made our performance unforgettable! This is how the cultural diplomacy looks like when Ukraine is loved and respected! To be continued! We have opened a new page of cooperation, and we are building a Bridge of Peace between our countries! “, – Bogdan Strutynskyi shared his impressions of the trip.