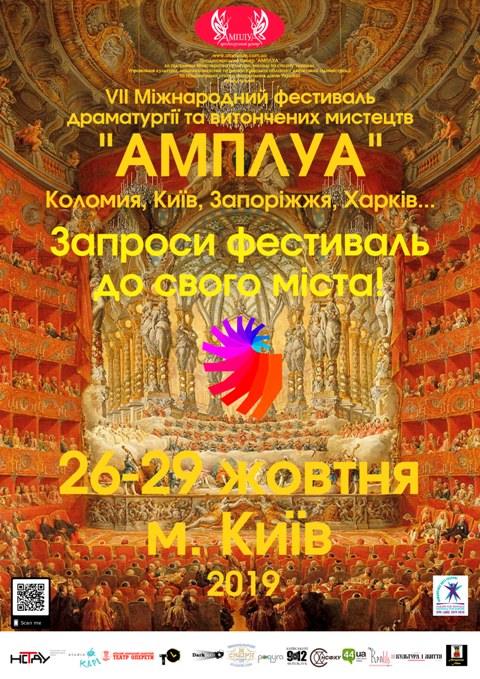 Kyiv National Academic Operetta Theater always supports innovative ideas of artistic youth. To this end, the Stage Lab experimental scene appeared in the theater. It is the first time she will host the AMPLUA International Drama and Fine Arts Festival, which for the eighth time brings together playwrights from around the world with Ukrainian directors. The director of the National Operetta of Ukraine and the Chairman of the National Union of theatrical figures of Ukraine Bohdan Strutinsky have long supported the Festival, which promotes contemporary dramaturgy in different regions of Ukraine.

Due to its high level of organization and social importance, the Festival has been awarded the European Quality Award – EFFE Label by the EFA European Festival Association and is being held this year in Kolomyia, Kyiv, Kharkiv and Zaporozhye. In Kolomyia on October 11-12, almost 2,000 visitors were inspired by the events of the Festival: watched wonderful performances, participated in interesting master classes and talked with playwrights and directors who came from Kiev, Poland and Germany.

In Kiev, the Festival will open on October 26 with an incredible photo exhibition “In Search of Beauty” by the winner of the Arsh MurTova International Comedy Art Festival, a member of the Azerbaijani Photographers Union. In four days there will be sketch performances of the songs of the winners of this year’s Festival and communication with them. Among them are authors from Kiev, Kolomyia, Azerbaijan and Sweden.

Kyiv National Academic Operetta Theater will conclude the festival days in Kiev on October 29, inviting admirers of the work of the wonderful Ukrainian writer Lana Ra, laureates of many competitions, including “Coronation of the Word”, “Korneychukov Prize”, the International Biennale of Contemporary Theatre’s Free Theater others Professional director Maria Yushko will present stage performances of two works by the author: for children “Snow White, Flies, Salt, or White Catastrophe” and for adults, “Stork”. After each play, a creative meeting with the author will take place.

“In 2019, at the VII Festival in Kiev, three times more works will be presented than last year. Most of all, we were impressed by the debutantes, who for the first time in their lives wrote a play for the theater stage and sent it to the court of professionals and spectators. The lyrics turned out to be so worthy that we even set up a special nomination, The Hard Debut. The play of the winner of the nomination will be published in the literary magazine “Rainbow”, – said the founder and art director of the festival Tatiana Shchastina.