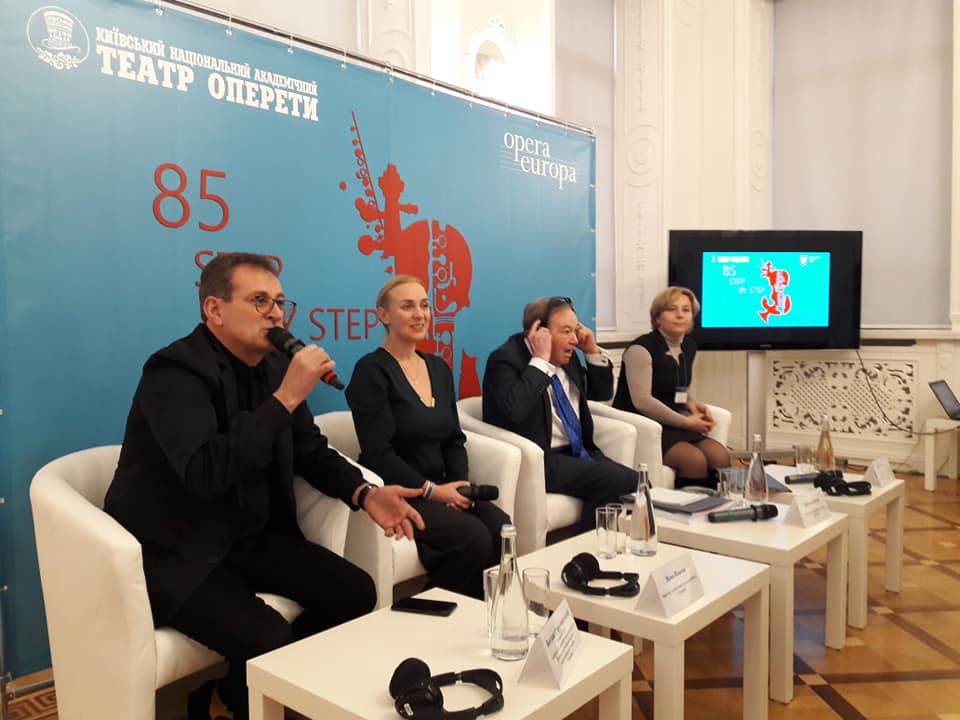 Within the scope of the “Operetta grand music” International Musical Forum, from December 16 to December 18, year 2019 the International Seminar on Theater Co-Production (“Theater Coproduction Workshop”) was held in Operetta Theater. It was attended by representatives of the theaters-members of Opera Europe and representatives of music theaters of Ukraine. The event was supported by the Department of Culture of Kyiv Local State Administration.
The participants of the seminar discussed the possibilities of creating joint theater projects, presented new works of their theaters, exchanged experience, ideas, projects, schemes of production of new theatrical productions.
The seminar is very important both for European theaters and for Ukrainian ones, It opens new horizons, allows to solve problems of expensive production and will allow Ukrainian musical theaters successfully integrate into the world theatrical process.

On the first day, welcoming speech was given by Bogdan Strutynskyi General Director-Artistic Director of the National Operetta of Ukraine, Diana Popova Director of Department of Culture of Kyiv Local State Administration, Nicholas Payne Director of the Opera Europe Association (Belgium) and Nadiya Kovalchuk Deputy Executive Director of Project Work, Member of the Board of the Ukrainian Cultural Fund.

Later this day the presentations of the following persons were heard: Gianluigi Mattietti, a theater critic from Parma (Italy), Sebastian Schwartz from the Reggio Torino Theater (Italy), Nicole Braunger from the Badisches Staatstheatre Karlsruhe (Germany) and Ludek Golat from the Silesian Theater (Czech Republic). Theater directors presented new works of their repertoire.

The second day was also dedicated to presentations of premiere performances. Representatives of the musical theaters of Ukraine and theaters-members of Opera Europe Association such as Sophie Houlbreque from the Opera Comique (Paris, France), Laima Vilimiene from the State Music Theater in Klaipeda (Lithuania), Mykhailo Shved from the Lviv National Opera (Ukraine), Plamen Kartaloff from the Sofia National Opera (Bulgaria), Lilia Neicheva from the Odessa National Opera (Ukraine), Renata Borowska from the Wielki Opera Theater in Poznan (Poland) presented their theaters.
Representatives of Ukrainian music theaters also provided their speeches at the seminar. Participants discussed successful and unsuccessful co-productions and sources of their financing. Also, they discussed the importance of developing international relations and finding partners for mutual projects.
During the seminar, Nicholas Payne the director of Opera Europe Association, was presented with a large gold medal by the National Academy of Arts of Ukraine. He was awarded for his creative achievements and promotion of Ukrainian art around the world.
The International Seminar on Theatrical Co-production is the establishment of close relations with the countries-participants and making cultural bridges between the states.