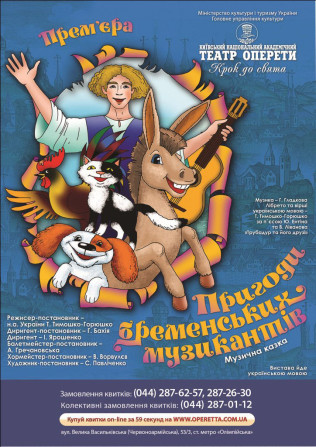 One time Troubadour saw the Princess and fell in love with her at first sight. But Foolish King does not want to give his daughter in marriage to a poor musician ..

40 years ago V.Livanov, Yu.Entin and H. Hladkov turned the famous fairy-tale by Brothers Grimm into the most joyful, the most popular cartoons and musicals whose heroes had been already loved by more than one generation of spectators.

Cute Dog, Donkey, Cat and the Strong- Voiced Cock, frightful forest robbers headed by their Otamansha, wise Buffoon and funny King, Sleuth Syshchyk, and of course Troubadour with Princess call you to adventures again! And their songs, jokes and fabulous miracles will not leave either a young spectator or an adult indifferent!

The performance is also played by the artists of the ballet, choir and orchestra.

The one acted musical fairytale.

The durarion is one hour and 15 minutes.

The performance is played in the Ukrainian language.